The time is almost here! Adepticon!

The time is almost here. The return of Adepticon! Once again all eye and ears in the 40K universe turn to the Westin Hotel in Lombard, Illinois for 4 days of hard fought battles, classes between titans and a beer on every table corner. This will be my third appearance at the event and as part if it I will not be resuming my role as roving servitor chronicling the event for those at the far ends of the warp. So no spiked skull reports or pict feeds of the painted goodness. No reports of xenos or heresies that may later be censored by the Inquisition. The feed will go dark.

But why, well I am one of those xenos, I am a Tau. As such I am sending in a dx-4 technical drone. This one one specially equipped with additional sensor equipment and upload capabilities for extended missions. This superior technology will be able to broadcast crisper, more detailed images and audio. The new refitted drone has been given a better AI and is designed to take active input from users via email communications to lathanm2501 "at" gmail. So send in your request of what you want to see and I will direct the drone to investigate further.
Posted by Diehard2501 at 8:11 AM No comments:

Email ThisBlogThis!Share to TwitterShare to FacebookShare to Pinterest
Labels: Adepticon

Minor forward progress. With any luck it will be usable befor Adepticon. I really need to press forward on this. Too many projects and no where near enough time. 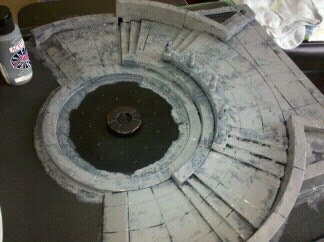 Email ThisBlogThis!Share to TwitterShare to FacebookShare to Pinterest
Labels: Adepticon, display board

Got the last few seals done. Just need to do a final count of each style so I can bag them up. Going on the first com first served for the choices. 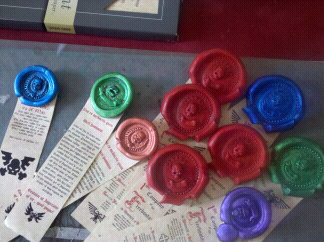 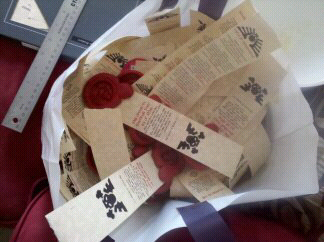 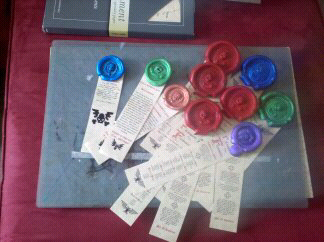 So what do he purity seals say? 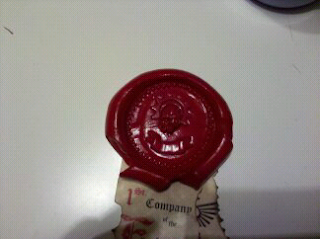 So I showed a quick preview of the council level seals. These are larger and will be going to a select few Freeboota members that were instrumental in setting up things for our Adepticon meetup. So what will these seals say? Well...

A little hard to see? Ok for those with glasses here is the text.
1st Company of the Freebootaz
the Council of Order
Chapter Master - Maldus
Master of the Arsenal -Total Anorky
Masters of the Watch - Brother Grimm
Master of Recruits - HockeyHyper
Chief Victualler - TIC
Master of the Rites - Diehard
the Brothers of the Blade
huoshini mattraptor
Z|insane txMaddog
BigBagBull AlexofCharmCity
ScottyPotty Celsork
MightyTim Nomad77
the Brothers of the Bolter
Randl Dzer0
Epic Kywallac
CrayolaSmoker HiveLord
Rancor709 Vallhallan42nd
Mattcor Arinaud
the Order of Flame
Dream Evil Napkinbaron
Cogliostro Shortfuse
Regulator HarakoniTool
Kymmerus Roleplayer
Snake Doctor Crimthaan
the Masters of Fate
Groundpounder MrInquisitor
Smittyrj78 Aslskfan
Willow316 FloppyK
Veritechc Greenhead
PaintMyFigs Darksheer
Eyes of the Fallen
Big Rob
Lt. Renen
Lt. Gregor
Acefisher1
The second is a prayer I found on I think the Bolter and Chainsword forum. This one shows up along with other in Latin on the regular ribbons.
I am trying to decide is I want to weather the rest of them like the sample one. Parchment burns fast and it is a  bit of a pain to work with for weathering. For a single badge it is no big deal but when you have dozens to do it can be overwhelming.
Posted by Diehard2501 at 10:01 AM No comments:

Test shots of the near complete special purity seals. Stay tuned for details. 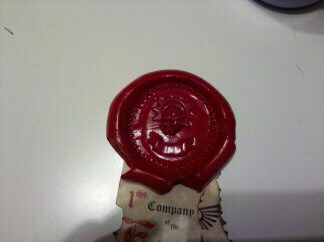 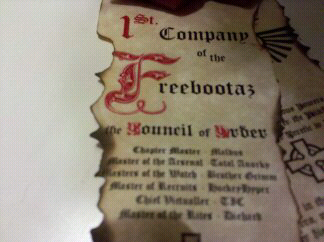 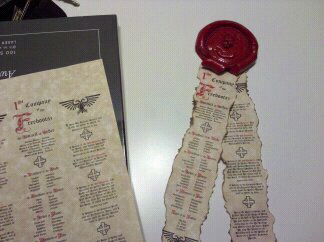 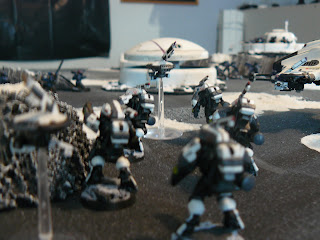 In response to your request for approval, the Aun of Voi’la have requested your patrol be accompanied ny Shas’Ui Rio’Myroi, a veteran battlesuit pilot of the Thoth campaigns. His command will help bring much needed fire support should your patrol encounter enemy forces.

The Aun also suggest rounding up a gaggle of Kroot, whose attunement to natural surrounds will assist in routing out any concealed forces amoung the vegation on the sector.

So got my reply form Old Shatter Hands and he suggested 2 alternatives for the mission. The first strips things down to the basics but stays with the theme of an advance scouting squad.

Troops:
6 Fire Warriors with Pulse Rifles 60 points
1 Devilfish, Disruption Pod 85 points
This unit has had it’s SMS and upgrades removed. The Gun Drones are more valuable than SMS anyday. They will pop off and contribute fire and get in the way of assaulters.

Fast Attack:
1 Piranha, Fusion Blaster 65 points
Again, stripped of it’s upgrades. Sure we lose BS4, but we need those points for more guns.

The second is a little tougher but also fits a theme assuming the area being scouted is a little more dense with terrain.

So what did I do, well here we go. Due to the speed of events and the need to redeploy some of our Firewarriors we are calling in some of the Kroot for additonal support. The area they will be scouting is a little rougher and their physical nature will allow them to keep up with the other fast moving units. We also suspect that the area will be hot with enemy patrols. To counter this were are deploying Stealth teams to allow us to get closer than we can with heavier units.

Created with Army Builder® - Try it for free at http://www.wolflair.com
Posted by Diehard2501 at 6:00 AM No comments: 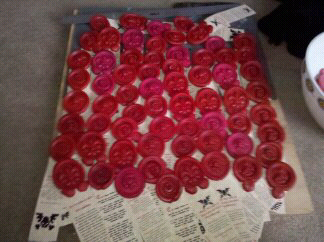 A prayer for the Emperor

Just a quick look at a completed purity seal before the final weathering. 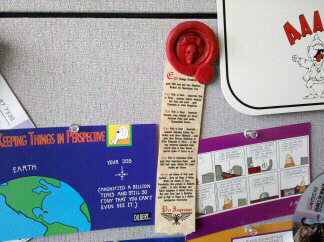 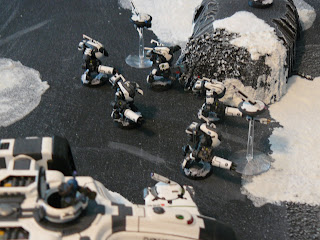 Greetings from the beach head at Adepticon. We are preparing our scouting patrol units to survey the area for a suitable location for the primary force strongpoint. We are spread thin due to the number of potential landing zones. Currently we are unable to send the normal Pathfinder units forward in this process. The teams we are sending forth are being taken from regular units. With the blessings of the Greater Good I trust this will be enough to hold the positions long enough for the main force to join them.