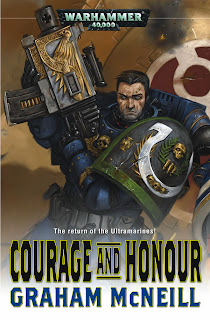 This is the 5th book in the continuing story of Uriel Ventus of the 4th company Ultramarines. This time around he has been called back into duty after being banished and redeemed for going against the Codex Astartes. This is his first mission and a proving ground for his worth as a Ultramarine. The story takes place on Pavonis, a planet we are introduced to in the first book in the series Nightbringer. The world is in a rebuilding state after the previous encounter and is being watched or rather occupied but Imperial forces. This sets up a bit of political tension between the local government and the military presence sent to stabilize it.

The story is driven in three different directions at the beginning with them all coming together at the end. The first is Uriel's return to command and whether he will be accepted after fallen so far. Second the political battle of a commerce driven world against the theocracy of the Imperium and lastly the struggle to rebuild a world ravaged by a civil war. The final is of course the battle with their ultimate enemy the Tau. The story about Uriel's reaffirmation give you a good behind the scenes look at the life of a space and what they go through in the name of honor. This includes scenes of life on Macragge and the history that space marines live in and with. You get to see some of the tension between the various commanders and chaplains that goes along with rebuilding trust in Uriel. This is fleshed out pretty well though if you were expecting the type of character study you got in Salamander you will be disappointed. This is partly due to this being the 5th story and the assumption the reader knows Uriel's history. Either way it does fit the book and progresses the story.

The political battle of the world is what actually sets up the actual battle with the Tau. In this case you have a failing government that is trying to hold on long enough to rebuild and as part of this rebuild they need to find a new source of revenue, any source. This is a commerce planet after all and a hub for trade. This position doesn't fit the typical Emperor fearing, xenophobic, eternal war that the Imperium likes. You have a great story line here that poses many questions such as what is the best way to rebuild a fallen world, by fire and brimstone or through diplomacy. There is a thread of how to rebuild the local PDF and police forces. Lastly you have the contrast in styles between the PDF and off world troops and how they look at each other.

The real meat of the book is the battle with the Tau. This reads like an IG book more than a space marine book. This is mainly due to the Tau fighting style of a disciplined attack that makes it a little harder for marines to shine. They get their moments in battle and some of the battles are incredible with close combat and the blood soaked, shot 3 times but still able to fight way marines are known for. There are a few points thought that mar the book by having just the perfect feature or item appear when needed. Sort of like Batman's belt in the 60's TV show having bottle of shark repellent. This happens late in the book though so it can be somewhat overlooked due to time.

The book is good and if you are an Ultramarines fan you will love it. Graham does a great job here but he feels rushed towards the end. It almost felt like they left a chapter out or made parts of the final battles easier to speed things up. This is mostly true of the pursuit into enemy territory section. The ending feels a little clipped as well but strangely fits the Tau in conservation of motion kind of way.

Final rating: Split 2+ / 4+ with a reroll
If you have read the other books in the series or are a Ultramarine fan I give it a 2+. It is a solid story and as a fan you can easily overlook the silly parts, brain eating, and get to the meat of the story.
If this is your first taste of Uriel and his brother it may be a little inside baseball and have you scratching your head from time to time. There are a few characters that reoccur from other books so you may miss small details. The story does still hold up though and that is what gives it a reroll.
Posted by Diehard2501 at 1:45 PM